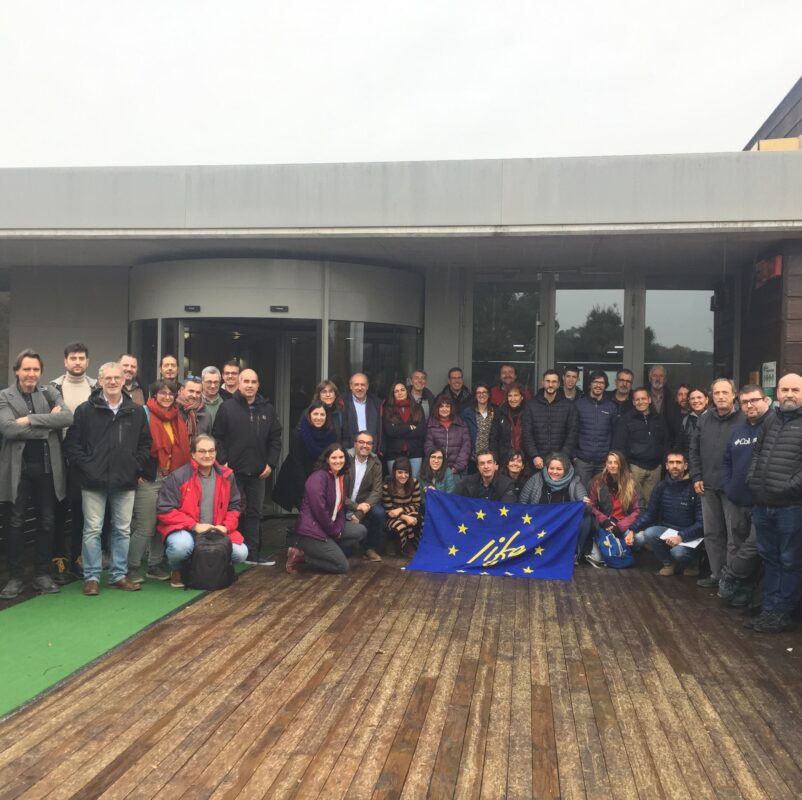 LIFE ALNUS has carried out actions for the ecological restoration of rivers and the recovery of alder groves and other riparian forests in the Ter, Segre, and Besós river basins.

On the second day, the workshop participants visited the actions carried out within the framework of the project in the area of Isla de las Gambiras and Isla del Arenal on the Ter river in Osona.

On December 12 and 13, the closing workshop of the LIFE ALNUS project was held at the Forest Science and Technology Center of Catalonia (CTFC). LIFE ALNUS is a LIFE Nature & Biodiversity project, lasting five years and coordinated by the CTFC, whose objective is the conservation, restoration, and governance of alder groves in Catalonia, the most threatened riparian forest in Catalonia and the whole of the European Union. 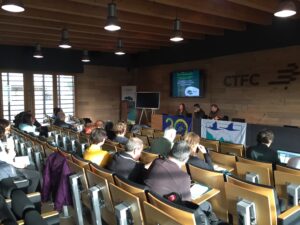 Over eighty people participated in this meeting, which focused on the discussion of a recovery model for riparian forests, and specifically alder groves, that is transferable to other areas of the Mediterranean that suffer from the same conservation problems. The scope of the project has been carried out in more than 1,000 linear km of river, along the Besós, Ter, and Alt Segre basins. These spaces include 24 Special Conservation Areas and 45% of the distribution of alder habitat in Catalonia.

Representatives of all the project partners (the CTFC, the Catalan Water Agency, the Balmes University Foundation of the UVic-UCC (through the Center for Mediterranean River Studies – CERM), the Catalunya La Pedrera Foundation, the Granollers City Council and MN Consultores en Ciencias de la Conservación SL) as well as representatives of different public administrations, universities and research centers, and private companies participated in the sessions, concluding that the goal of fluvial restoration must be to recover natural processes, increase the complexity and heterogeneity of the hydromorphological system and biological diversity to return these extremely diverse ecosystems to a good state of conservation.

The first day of the conference consisted of a workshop divided into three modules in which the experiences and results obtained throughout the project were presented. Jordi Camprodon and Pol Guardis, researchers from the CTFC and coordinators of the LIFE ALNUS project, together with Roser Maneja, deputy director of research at the CTFC, welcomed the participants to the conference.

During the day, it was possible to follow the interventions of several experts who have participated, in one way or another, in the definition, design, and implementation of the project’s actions, accompanied by talks from representatives of all the partner entities of the project, thus sharing the experiences and conclusions developed over the last five years. Professor Alfredo Ollero, from the University of Zaragoza, a leading expert in fluvial hydromorphology, delivered the inaugural presentation, where he insisted on the need to promote the recovery of rivers in the face of the new challenges that global change brings, from the elimination of impacts and prioritizing natural restoration.

Also participated in the workshop the European projects LIFE Fluvial and LIFE Invasaqua, focused on the improvement and sustainable management of fluvial corridors in the Iberian Atlantic region and the fight against Iberian aquatic invasive exotic species, with explanations of the objectives of the projects and results. Experts in the cultural, pedagogical, artistic, and spiritual values of riparian forests participated in the day’s last module, which highlighted the tangible and intangible values that these spaces contribute and reflected on the need to induce lasting changes in society, accentuating that it is not enough to provide knowledge or information (technical, scientific, economic, etc.), but this information should go together with intense emotions, such as those that nature can produce. 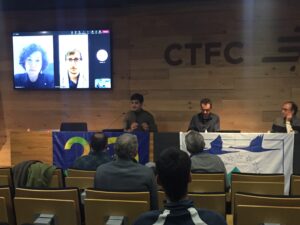 During the second day, the participants visited the actions of the project that have taken place in the area of Isla de las Gambiras and Isla del Arenal in the Ter river as it passes through Torelló and Les Masies de Voltregà. Thus, it was possible to observe the hydromorphological restoration works of the river and the banks, executed by the Catalan Water Agency as a partner of Life ALNUS. The project consisted in the recovery of sediments in the channel and secondary branches of the river, very rich in ecological diversity, which had dried up due to historical extractive activities. Physical obstacles such as footbridges that prevent the natural circulation of the river were also removed and the natural recovery of the riparian vegetation was reinforced with plantings of native species, which have been implemented in place of the invasive ones that were there at the beginning of the project. Some of the largest tree stumps of the exotic species have been left in the same area to create micro-habitats and serve as a refuge for animals, such as macro-invertebrates, amphibians, or mammals. These actions were taken to achieve the maximum impact with the minimum cost, leaving the habitat to reorganize itself through key actions. 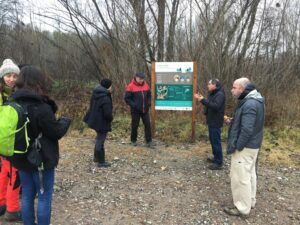 Another of the main actions led by LIFE ALNUS has been to promote and carry out the previous studies for the expansion of the Natura 2000 Network in those most priority river spaces, above all in the alluvial plains with alder groves or potentially recoverable like alder groves and other riparian forests, on the part of the General Directorate of Environmental Policies and Natural Environment of the Generalidad de Catalunya, which is expected to be approved by the end of 2023.

During the conference, it was emphasized that the perception of the population is essential for designing river restoration projects. Making people understand the need for restoration projects, the functions of the riparian forest, how to alleviate the effects of floods on infrastructure, remove our fear of riparian vegetation every time there is a flood, etc. are basic aspects to continue debating with the coastal populations to change stereotyped and poorly founded perceptions.