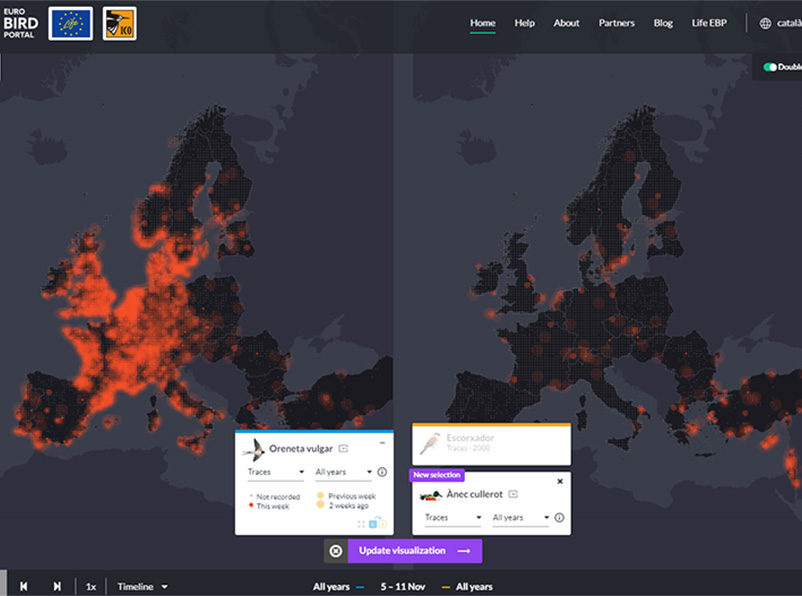 Today the EuroBirdPortal (EBP) released an improved version of its viewer: now bird movements across Europe can be visualized in a way never seen before. This new version of the viewer has also been updated with 40 million more new bird records collected in 2016 and now shows animated all-year round maps of 105 bird species for a period of seven years – ensuring that the EBP maintains its position as the largest and most dynamic citizen science biodiversity data flow in Europe.

The EBP is a project of the European Bird Census Council (EBCC) developed through a partnership of 81 institutions from 29 different countries that mobilizes the data collected by more than 100,000 volunteer birdwatchers. The partnership involves biodiversity data centers and reference ornithological institutions in their respective countries, accumulating a long-time experience collecting high quality monitoring data from thousands of volunteer birdwatchers and turning this information into sound science.

The main purpose of EBP is to combine the data collected by the different online bird recording portals operating in Europe in order to describe large scale spatiotemporal patterns of bird distribution (seasonal distributional changes, migratory patterns, phenology) and their changes over time.

The EBP demo viewer aims at showing the scope and potential of the project depicting the week-by-week distributional patterns of 105 bird species using a total of nine types of species maps and climatic variables. Since two animated maps of any type and year can be selected to be shown simultaneously for direct comparison, all in all, currently more than 30 million different map combinations are available to choose from.

This improved version of the viewer also incorporates a new visual design and several new functionalities, including zooming and embedding options. Moreover, the extension of the area covered by the maps has increased markedly thanks to the incorporation of data from Bulgaria, Cyprus, Estonia, Greece, Hungary, Israel, Romania and Turkey.

Gabriel Gargallo, EBP project coordinator, said: “We hope that the new improved version of the EBP viewer will help highlight the value of the data collected through the online bird portals operating in Europe and the relevance of sharing bird observations. The EBP main objective is to unravel the seasonal large-scale patterns of bird distribution in Europe, but this can only be possible thanks to the contribution of 100,000 volunteer birdwatchers that share their observations in the online portals and by the efforts of EBP partners to combine this huge amount of data in a sound and structured way.  Thanks to these combined efforts we are in a better position to understand changes in bird migration patterns, like the new route followed by Cranes in Southern Europe, or the influence of weather and climate on bird migration.”