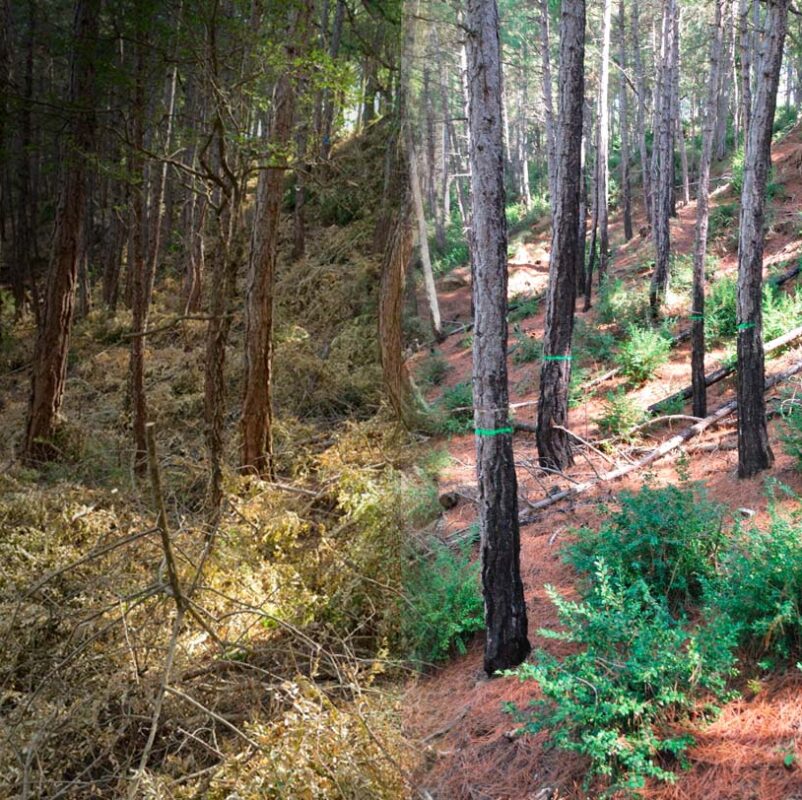 Prescribed burning: an effective tool to improve the resistance of forests to fires and droughts

The simulations of resistance to droughts and fires carried out by the researchers include real data of the forest structure at the tree and undergrowth scale.

The burning of the undergrowth contributes to improving the resistance of forests to fires and droughts.

Researchers from the Forest Science and Technology Center of Catalonia (CTFC), in collaboration with CREAF, have led a study to better understand the effect of different forest treatments on the resistance of black pine forests to droughts and fires, and they have verified that the undergrowth plays an important role.

The forest treatments studied include thinning of different intensities, mechanical treatment of the undergrowth, and prescribed burning of the remains. In three localities of the network of demonstration plots of the Forest Property Center in Solsonès, the undergrowth was mechanically cleared, and two types of thinning were carried out as part of the LIFE Demorgest and LIFE Pinassa projects: high-intensity thinning (50% final canopy coverage) and low-intensity thinning (75% final canopy coverage). In addition, a prescribed burning of the remains was carried out in one-half of each area. Five years after the forest treatments, within the LIFE Climark project, the effects of management on fire risk and water availability for taller pines have been evaluated using simulations based on field data which included the structure of the forest at tree and undergrowth scale.

The results indicate that forest treatments contribute to the resistance of the forest to both disturbances compared to no management and show that when the understory has been treated with prescribed burning, the resistance of the forests increases. Prescribed burns reduce understory growth in the years following management and therefore also reduce undergrowth water competition for trees and the amount of available fuel that can burn during a fire. The results of these simulations will be verified in the future by analyzing the growth and water use efficiency of the tallest trees in dry years depending on the treatment. “We expected that the intensity of thinning would be the factor that most influenced the vulnerability of the forest to droughts and fires, but the simulations indicated that the understory also plays a very important role: the treatment that contributes most to resistance combines thinning of the trees with prescribed burning of the undergrowth”, explains Lena Vilà, CTFC researcher and lead author of the article. Now, as part of the HoliSoils project, it is being studied whether the burning of the remains generated during the mechanical treatment of the undergrowth has unwanted effects on the soil. The research team concludes that forest management, especially accompanied by the burning of remains, improves the resistance of pine forests in the Solsonès to both fire and extreme drought.