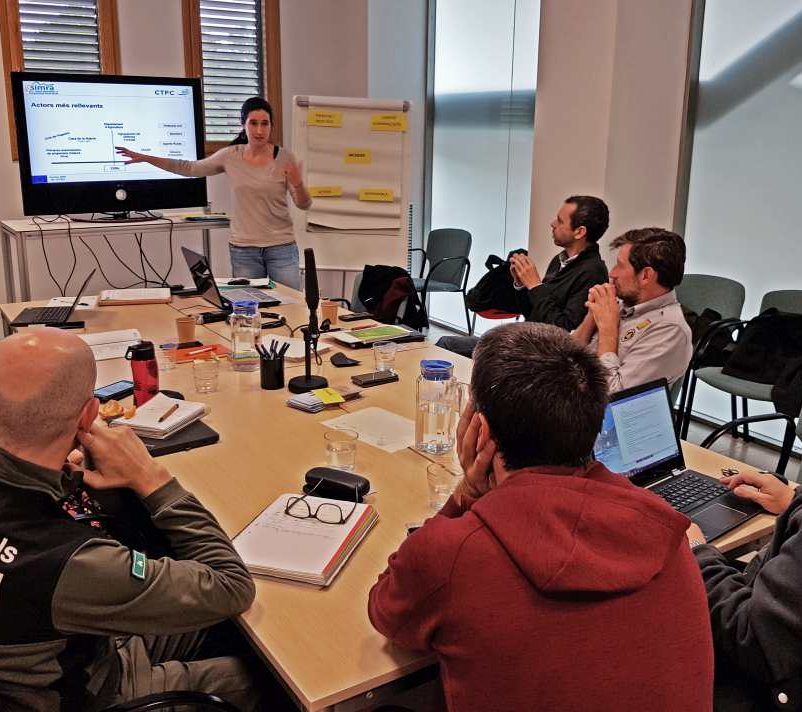 When social innovation grows strong: The case of ADFs in Catalonia

CTFC invited different SIMRA project stakeholders to a Validation Workshop in Solsona on 4 December 2019. In this workshop, we presented our main results to the stakeholders, and invited them to imagine what changes we should undergo as a society in order to be able to safely coexist with forest fires.

SIMRA is an H2020 project that further explores social innovation processes in rural areas. At CTFC, we have spent the last 2 years and a half doing extensive research on a case study that is deeply linked to the Catalan rural society, and to Catalan forest ecosystems: Forest Defence Groups (or ADFs, by their Catalan acronym). We have deployed the SIMRA methodology to understand and analyse how an initiative that started with some neighbouring forest owners trying to help each other, can grow into a fully institutionalised and operating network that is 300 Groups and 9000 volunteers strong, and which last year was awarded the highest recognition there is from the Catalan government: La Creu de Sant Jordi (Sant Jordi’s cross).

The results of this research are part of the SIMRA project’s deliverables and reports, and scientific publications are currently being prepared. However, it is considered good scientific practice to report back to the individuals who have selflessly helped researchers to carry out their research. A step sadly often omitted, it was an important component to the researchers and practitioners who conducted this project, both in principle and as validation of the research results. We invited a group of people to the CTFC headquarters in Solsona and offered them an overview of the main results of the study, asking them to correct, provide nuance or enrich whatever information they felt could benefit from additional inputs. This was enough to trigger discussion among participants, who were very participative and interested in our presentation.

In addition, and in order to make the most out of a meeting with the local stakeholders, we added a second objective to the morning; Building on SIMRA’s results, and knowing that many things have changed over the 33 years of existence of the Forest Defence Groups, we wanted to raise two questions: first, what exactly has changed during this time?; and second, what role should civil society be awarded in this new context? Representatives of firefighters, rural agents, civil protection, and ADFs, in addition to some experts in the field, were invited to the table to reflect and discuss about these issues. What is the responsibility of civil society in the wildfire issue? Who should do what? How much more can we do?

These questions have no easy answer, and reflections in this direction are still scarce in academia. Our goal was not to reach a conclusion by the end of the morning, but rather to get a first taste of the primary concerns and thoughts of the main stakeholders in the matter. And that we achieved. Now we hope to be able to build on this discussion, extend our literature research, and strengthen this line of work; especially as it links directly to the most human dimension of wildfires, which is too often forgotten, and very important to future work in this area.